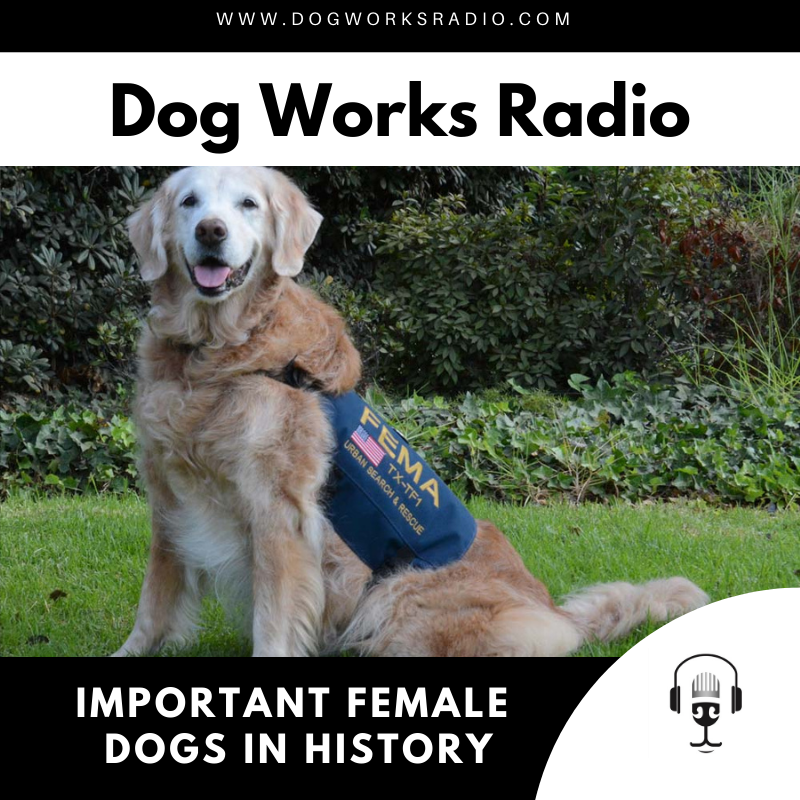 It’s a fitting time to pay homage to some of history’s most indomitable female dogs that went above and beyond (in one case, literally) in service to humankind. Without further ado, let’s dive right in! 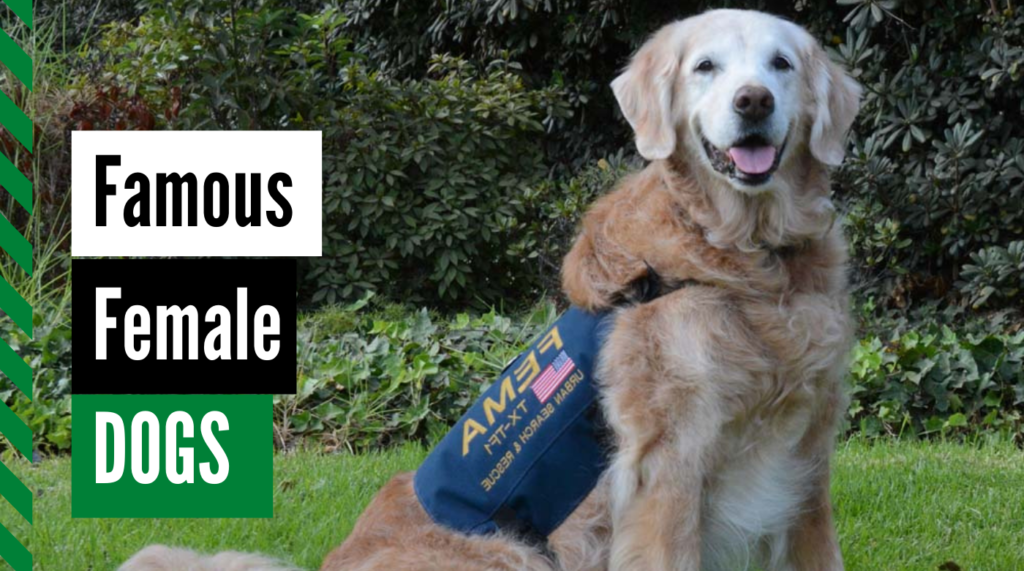 We have talked about a lot of famous dogs over the years on this podcast. We have even mentioned some of these dogs on this list, but I don’t think we have ever paid homage to a female-only cadre all at once. One dog is super special to us on this list. Her name is Bretange and we will talk about her later in the show but did you know that we had a litter of sled dog puppies born on 9-11 one year at our sled dog kennel, Team Ineka and we named them after the dogs that helped out in the disaster. One of them, who we called Bre, didn’t quite make it as a sled dog so we trained her as a service dog for a young man up here in Alaska. Over the years Bre has helped this young man and even saved his life. Twice! Did you know that this special dog and her handler even share a birthday too!

Ok, let’s talk about some other famous female dogs. Up first…

Years before Sally Ride’s historic journey, two other females went into space. On August 19, 1960, the two mixed breed dogs were on board the Sputnik 5 capsule, completing several orbits and returning safely. Because of the mission’s success, the Soviets were able to send a man into space, cosmonaut Yuri Gagarin, shortly thereafter.

These female dogs were instant heroes in the Soviet Union. They were preserved after death and are currently on display at the Museum of Cosmonautics in Moscow. Strelka’s life has an especially interesting footnote. Nikita Khrushchev gave one of her puppies, Pushinka, to First Lady Jacqueline Kennedy, and Pushinka became one of the Kennedy family’s several presidential pups.

When we think of war dogs, we think of German Shepherd Dogs, Belgian Malinois, and other imposing breeds. But one of the heroes of World War II was Smoky, a tiny Yorkshire Terrier. American soldiers found Smoky in a New Guinea foxhole and she became the full-time companion of Corporal Bill Wynne. She ate what he ate and slept where he slept.  More than that, Smoky flew rescue and reconnaissance missions and even barked to warn Corporal Wynne of incoming shells.

Being a typical Yorkie, Smoky was adept at learning tricks and worked with Special Services to entertain soldiers in field hospitals. She continued to do so back in the U.S., having been sequestered in an oxygen mask case for the flight home. Smoky appeared on television and made public appearances while continuing to comfort soldiers in veterans’ hospitals. In fact, because of her work with vets, Smoky is considered by some to be America’s first therapy dog. There are memorials to her across the country and in Australia, including at the AKC Museum of the Dog in New York City.

In a different war, much, much earlier than World War II, Sallie, thought to be a bull-type terrier, also served alongside her men. Sallie was given to First Lieutenant William Terry, of the 11th Pennsylvania Volunteer Infantry, during the Civil War. Only four weeks old at the time, Sallie was raised with the regiment and became their mascot. She trained, marched, and even went into battle with her men.

Sallie became separated from the troops during the Battle of Gettysburg and was found three days later, unhurt, guarding “her” wounded soldiers and the bodies of the fallen. But in 1865, at Hatcher’s Run, Sallie was shot and killed during the battle. Soldiers buried her on the battlefield, even while the fight still raged around them. The monument to the 11th Pennsylvania at Gettysburg includes a likeness of Sallie at the feet of her family of soldiers.

If you’ve ever been to Morristown, New Jersey, you’ve probably seen the statue of a man and his German Shepherd Dog. The man is Morris Frank, who was blind, and the dog is Buddy, his guide dog. Yep, Buddy was a girl! In 1927, Frank read an article written by dog trainer Dorothy Harrison Eustis, about dogs being trained to guide blinded veterans of World War I. He reached out to her in Switzerland where she was training police dogs, and she agreed to help him find and train a guide dog of his own.

Frank went to Switzerland and together, they trained Buddy. The duo returned to New York City, where they showed the kind of teamwork that guide dogs and their handlers are known for, crossing dangerous intersections and navigating crowded streets. Frank and Eustis went even further and worked together to create The Seeing Eye program in 1929, now based in Morristown, which was the very first training program of its kind. Because of them—and Buddy—the blind could now enjoy new freedoms and mobility. Frank was instrumental in pushing for laws that would give service dogs access to public spaces, paving the way for the Americans with Disabilities Act.

Many military female dogs have been instrumental in aiding troops during wartime and Lucca stands out for her service. The mixed-breed Lucca was trained to detect explosives and served with the Marines. She served in Iraq and Afghanistan, completing over 400 missions. During her six years of service, she protected the lives of countless soldiers.

In 2012, during her last tour, Lucca lost a leg in an IED blast, ending her military career. She was honored with the PDSA Dicken Medal, the canine version of Great Britain’s Victoria Cross. Lucca is the first U.S. Marine Corps dog to be awarded such an honor. After her service, Lucca retired to live with Gunnery Sergeant Chris Willingham and his family. “She is the only reason I made it home to my family and I am fortunate to have served with her,” affirmed Willingham.

Some dogs take the phrase “therapy dog” to a whole new level, starting with Sigmund Freud’s Chow Chow Jofi. Freud, who had never been particularly fond of dogs, became a dog lover late in life. He acquired Jofi towards the end of his career and she became his constant companion, especially during office hours. Freud believed that Jofi could actually “read” his patients’ emotions. The dog sat close to patients who were calm and reacted to anxious or upset patients by moving across the room. Freud also believed that the dog had a calming effect on his patients, especially children, and that humans were more candid and relaxed in front of a non-judgmental presence like a dog.

Jofi spent so much time in Freud’s office that she knew the length of the patient session, known as the “50-minute hour.” As the end of the session approached, Jofi would yawn and stretch, even heading towards the door herself. Towards the end of a career marked by two World Wars and the excruciating pain of jaw cancer, Freud is quoted as saying, “Dogs love their friends and bite their enemies, quite unlike people, who are incapable of pure love and always have to mix love and hate in their object-relations.”

The Labrador Retriever guide dog, Roselle, was with her owner, Michael Hingson, in his office on the 78th floor of Tower One, when the World Trade Center was attacked on September 11th. When the plane crashed into the building, 18 floors above her, Roselle calmly led Hingson through the chaos, down 78 floors. It took over an hour to make their descent and get out of the building. Even as Tower Two collapsed, Roselle never wavered from her job, guiding Hingson through the debris and smoke to shelter in a subway entrance. She then led her owner 40 blocks to a friend’s apartment.

After the attacks, Hingson left New York for California where he worked for Guide Dogs for the Blind. Roselle lived with the Hingson family for the rest of her life, dying on June 26, 2011. She received the AKC Humane Fund Awards for Canine Excellence (ACE) in 2002 as well as posthumously receiving the 2011 Hero Dogs Award from the American Humane Association.

There were many hero female dogs in the days after 9/11, including Bretagne (pronounced brit-nee), a Golden Retriever. She and her handler, Denise Corliss, traveled from Texas, where Corliss was a volunteer firefighter, to help in the rescue and recovery efforts after the attack. It was the pair’s first rescue and recovery mission.  For ten days, Bretagne worked 12-hour shifts, searching for survivors, sleeping outdoors with her handler, and comforting other emergency responders.

When Bretagne returned to Texas, she continued her work as a search dog, with the Texas Task Force 1 and served in the aftermath of Hurricane Katrina. She and Corliss returned to New York in 2014 and 2016 to visit the September 11 Memorial. Bretagne died at age 16 in 2016. Members of the Texas Task Force and the Cy-Fair Volunteer Fire Department lined the sidewalk outside the veterinarian’s office to say farewell.

As we celebrate the many women who have shaped history, let’s also salute these historic female dogs. And give your dog some extra love this month. In her own way, she’s adding so much to your life.

Did you know the single best thing you can do is tell your family and friends about our show? Please show them how you listen and even have them subscribe so they never miss an episode.

Host, Michele Forto’s Bio: Michele Forto is the lead trainer for Alaska Dog Works where they train dogs for service work, obedience, and more. Michele is also the business manager and husky wrangler for Team Ineka. When Michele is not training dogs she loves to travel on their annual Rock n Roller Tours where she and Robert hit up rock concerts and roller coasters around the country.

Host, Robert Forto’s Bio: Robert Forto is the training director for Alaska Dog Works where they train dogs for canine obedience, working dogs, therapy dogs, and service dogs for clients all over North America. He is also a dog musher and he and his wife operate a 36-dog mushing kennel in Willow, Alaska, called Team Ineka. They can often be seen at local races and leading expeditions in the Alaska backcountry with outdoor leadership students at the University of Alaska. Robert is the producer of Dog Works Radio that has been on the air since 2009 and is currently simulcast on a local radio station, KVRF in Palmer, Alaska.

Audience feedback drives the show. We would love for you to email us and keep the conversation going! Email live@dogworksradio.com or  call us at 907-841-1686