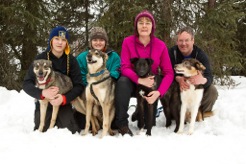 Brother and sister mushing duo, Andy and Alea have more mushing experience than a lot of adult dog drivers. Both starting on sleds at the age of four with their Golden Retriever-Alaskan Husky mix in Western Alaska and even racing in France!

Alea (17) is a senior in high school and is a mid to long distance musher, with experience in several longer races including the Willow Junior 100, the Junior Tustemena and the Junior Iditarod–which she plans to compete in this coming February.

Andy (14) loves the speed of sprint mushing and competes in several races throughout the season and has taken part in the Arctic Winter Games.