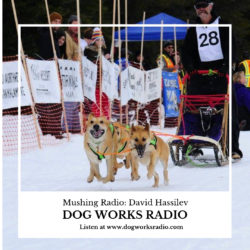 David Hassilev, a retired Coast Guardsman spent his career bouncing between California and Alaska. He was introduced to dog mushing from time spent in Alaska watching the Iditarod starts and the Anchorage Fur Rendezvous races. However it would be many years later that he started to train and mush dogs after acquiring a single male Chinook named Kona. Many say that Chinooks are like potato chips, and so one became two an two became three. Then followed a couple of retired Alaskan Huskies, Iditarod veterans to help train the Chinooks as well as David. David stayed with the 3 Chinooks but now has 20 Alaskan Huskies as well, though some are pups and some are retirees. He currently resides and trains in northern Idaho but will be moving back to Alaska in 2019 making Willow Alaska his home. His wife Jane assists as handler and helps train in the fall with ATV.

“A dog is the only thing on earth that loves you more than he loves himself.”– Josh Billings

Audience feedback drives the show. We would love for you to email is and keep the conversation going! Email live@dogworksradio.com or call (303) 578-9881 and leave a message. We would love to hear from you!