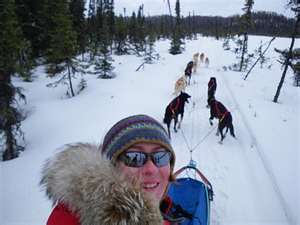 Taggart, of Ketchikan Alaska and currently living in Willow, is running in her second Iditarod in 2013. Finishing in a respectable 43 of 63 in her rookie run in 2011 she hopes to do even better this time around. This year she is running with a kennel of 22 dogs, many of them veterans.

Taggart a school teacher caught the mushing bug in 2001 when she was a handler. The next thing she knew she was moving north and planning her dream.