Today we are so excited to be celebrating seven years of broadcasting “The Sibe Vibe” on Dog Works Radio! 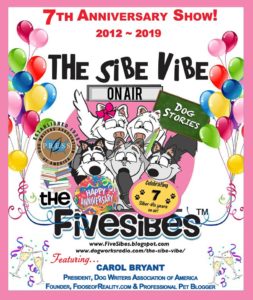 My guest on this 7th Anniversary edition is Carol Bryant, a professional pet blogger, freelance writer, social media pro, speaker, and consultant. As the current president of The Dog Writers Association of America (DWAA), Carol’s motto is “My heart beats dog®.” She is the founder of FidoseofReality.com, a health/wellness/lifestyle dog blog for Cocker Spaniels and their canine friends, and its fundraising arm, Wigglebutt Warriors, and the Club Cocker Facebook group, inspired by her love of the breed. 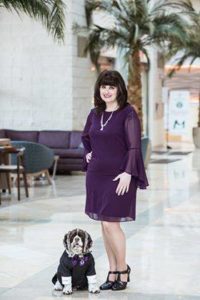 Carol is the new president of the Dog Writers Association of America (DWAA), which is the most recognized professional writing association devoted to dogs. In addition to an annual writing competition, the DWAA has also launched a new program called Young Writers on the Web, where writers 18 years old and under “are encouraged to submit stories about dogs for possible publication on a special section of the DWAA website,” and also possibly in the DWAA’s newsletter Ruff Drafts.

Through Wigglebutt Warriors, co-founders Carol and Darlene Bryant, along with their Cocker Spaniel, Dexter, are “crusading to save dogs’ lives” and together they have raised over $75,000 for homeless dogs to assist with medical, food, and basic needs until they find their forever homes. While they “are not a 501(c)3, we raise money for 501(c)3 dog rescue groups in the United States.” 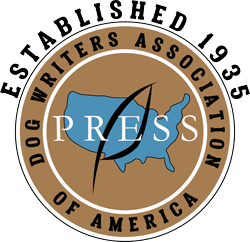 “A dog lover of the highest order” is how Gayle King introduced her when she appeared with her Cocker Spaniel, Dexter, on Oprah Radio’s Gayle King show to dish dogs.As the former PR and Marketing manager for BlogPaws, Carol is a familiar face in the online dog park. She is the co-author of a pet blogging book slated for release in 2019, so stay tuned! 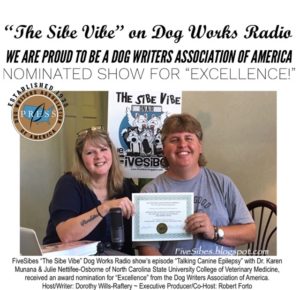 Today’s guest is Kelly Lambert, the president and one of the founders of Raven’s Husky Haven and Rescue located in scenic DeKalb County in Illinois. Named after their special dog “Raven,” Kelly and her partner, both practicing attorneys, founded the rescue in 2011 and built a rescue facility that sits on four acres of beautiful land that includes a large playroom for the huskies, a grooming room, a kitchen, 12 indoor/outdoor kennels, some Husky-proof fenced yards (meaning fences buried underground) for the huskies to play in, and even trails for Husky hikes! There is a live-in, on-site manager (a retired 29-year US Army colonel veteran), a part-time employee, and a group of dedicated volunteers, including students from the nearby Northern Illinois University, NIU, which is “Home to the Huskies!” 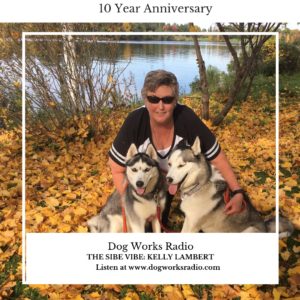 In this show, we discuss the rescue’s dream facility and the special extras they provide Huskies such as a live-in onsite manager, providing the Huskies with soft music, and the very popular “Luv Time,” as well discussing the specific needs and traits of the beautiful Siberian Husky, the importance of understanding the breed prior to welcoming a Husky into your home, success stories of Raven’s alumni, and how to adopt a Husky from Raven’s Husky Haven and Rescue. 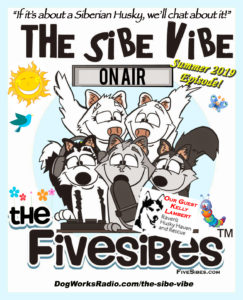 While Raven passed away in 2015 from Cushing’s disease, her legacy lives on through the wonderful rescue named after her and the numerous Huskies rescued, rehabilitated, and adopted into forever homes!

Today’s show is our annual Purple Day® for (K9) Epilepsy episode of “The Sibe Vibe!” Host Dorothy Wills-Raftery, author, advocate, and official Purple Day® Ambassador since 2012, is launching a new storytelling feature to her podcast that will periodically air in between traditional interview episodes. This new feature will be the reading of excerpts from her book EPIc Dog Tales: Heartfelt Stories About Amazing Dogs Living & Loving Life With Canine Epilepsy. Dorothy will be sharing with our listeners several stories each episode from the 122 stories the loving families and caregivers of dogs living with seizures and Canine Epilepsy shared with her in her book EPIc Dog Tales. 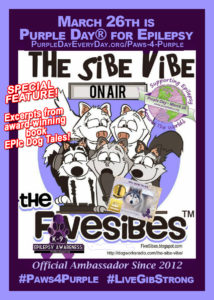 The “Epi-Stars” of the book are of all different breeds from around the globe, and in this premiere episode, she will be highlighting three Siberian Husky Epi-dogs, including her own Gibson, whose journey launched a worldwide awareness campaign. We do issue a “tissue alert” as these touching stories can bring on a few tears as we learn about some pretty amazing Epi-dogs and their families, who share the trials and tribulations of Canine Epilepsy, but are so inspiring in that they do not let it stop them from enjoy life!

The beautiful, large coffee table book is still available in limited quantities, and also features an extensive informational and resource section on Canine Epilepsy. A portion of proceeds from the book are donated by Dorothy to Canine Epilepsy Resources Epil-K9 Foundation housed at the North Carolina State University College of Veterinary Medicine, Company Animal Epilepsy Department for Canine Epilepsy projects and research.

While Purple Day® is held annually on March 26th, it is now part of global sponsor The Anita Kaufmann Foundation’s Purple Day® Every Day because for those living with Epilepsy, awareness isevery day.

“The Sibe Vibe” is also available to download on the Podcast app for iPhones and iPads, as well as on iTunes under the Dog Works Radio family of shows! 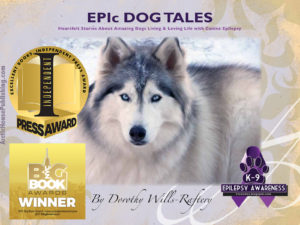 Links for Resources in this Episode:

The Anita Kaufmann Foundation on Facebook:https://www.facebook.com/akfus/

Purple Day® for Epilepsy on Facebook:https://www.facebook.com/PurpleDayforEpilepsy/

The Anita Kaufmann Foundation on Twitter:@AKFUS

Purple Day Every Day on Twitter:@PurpleDayEvryDa

Today’s guest is Suzi Karp owner/editor of AmericanPet Magazine™(APM) for nine years, who has an extensive award-winning background and education in graphic design and marketing. AmericanPet Magazine™ has 17 issues published, and there is a future book to be released featuring “The Best Of” from the first five volumes. After a two-year sabbatical from the magazine, and with the “desires of an entrepreneur and the love for pets,” Suzi once again seizes the day and takes a second leap of faith, making an awesome comeback for AmericanPet Magazineas she once again is actively pursuing her lifelong passion and turning it into a reality, one she can share with others. 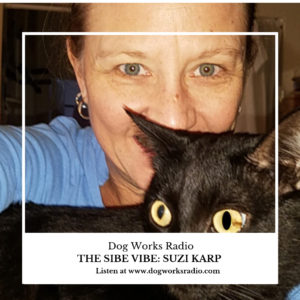 Thanks to the years of unconditional love and inspiration from all her furbabies, which includes her precious cats, past and present (who she lists as “staff members” of APM!)and the ambition to help save lives, Suzi says her mission is to educate and entertain while being a voice for the voiceless for #AllPets. Suzi’s motto is: “One Pet at a Time.. One Day at a Time.. One Life at a Time.. Your Voice Matters!”

AmericanPet Magazine highly supports animal rescue and Canine Epilepsy awareness. The variety of stories within the magazine’s pages cover a myriad of animals (including many from our “The Sibe Vibe” host, Dorothy Wills-Raftery, whose Siberian Huskies, the FiveSibes, have been featured both on the cover and in stories)! For the book lover, there is a “Best in Print” section in each issue for recommended reads. Suzi embraces stories on all pets—from dogs and cats, to bunnies and birds, ferrets and horses, and more! APMis published quarterly and available on the website at www.AmericanPetMagazine.com. Currently, digital copies are available to read online FREEof charge! Printed copies are in the works! 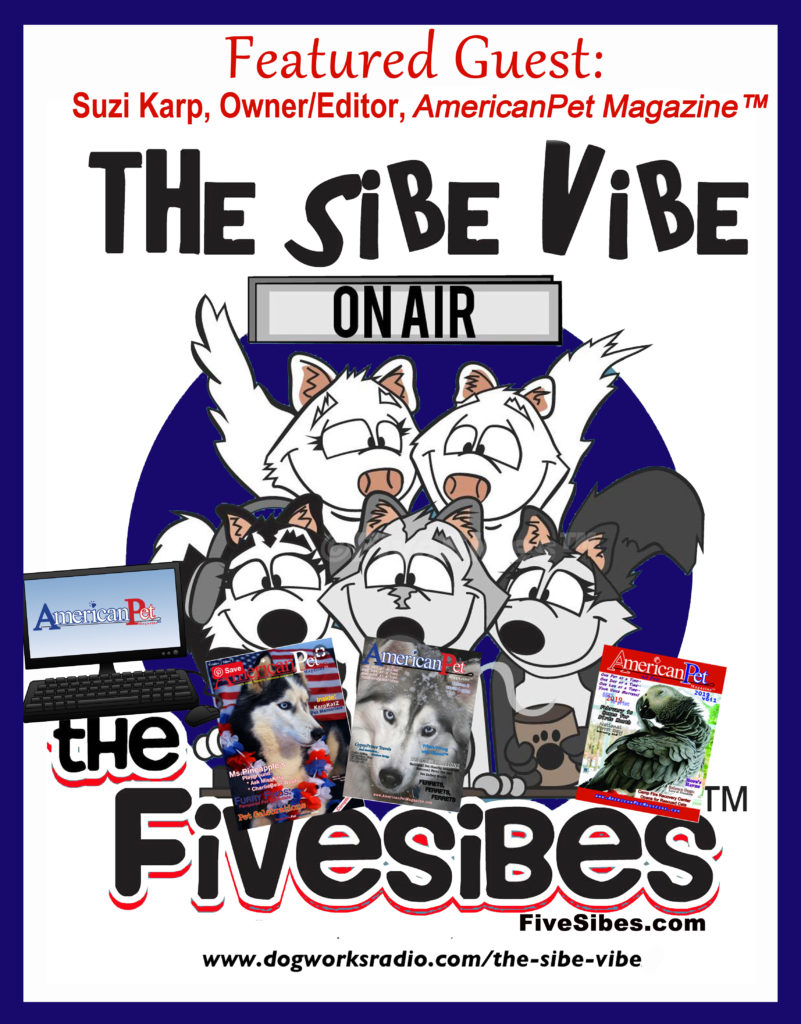 APMand several contributors recently hosted a three-day virtual event party on Facebook to celebrate the new release of the magazine! There will be more virtual issue release events, and Suzi has “a big raffle planned in the near future” and she opened an online store this year “benefiting my Karp Katz Rescue & Sanctuary and AmericanPet Magazine‘s mission.” So, be sure to follow AmericanPet Magazine’s Facebook and Twitter pages to keep up with the events!

Suzi says her ultimate goal “is to head out onto the open road in an RV with my furbabies, where I will be able to bring to you live videos and awesome magazine stories, featuring rescues and sanctuaries throughout the country.”

Sponsorship and donations are always welcomed, says Suzi, in addition to contributed stories, to continue in the success of their mission, which includes donating a portion of the magazine’s ad fees to help animals in need.

October is national is National Animal Safety and Protection Month. While every day our pets’ safety is a priority, it is the perfect time to highlight some tips, recommendations, and helpful hints from a 911 expert to keep our pets safe or tend to them should an emergency arise and we are unable to get our pet to a vet. 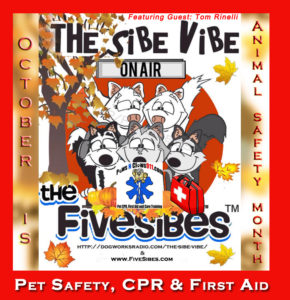 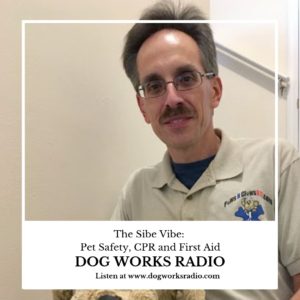 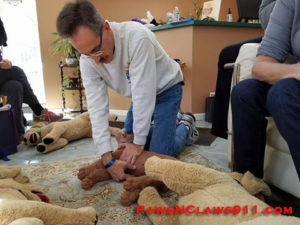 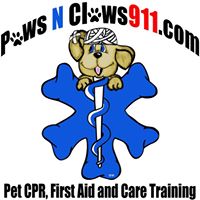 A lifelong dog lover and owner, Tom has applied his specialized background to help Boy Scouts and Girl Scouts earn a Pet Care Merit Badge, as well as educating pet parents, caregivers, pet care professionals, rescue volunteersand first responders, including members of the United States Coast Guard, in lifesaving skills and techniques of Pet CPR and First Aid for both dogs and cats.