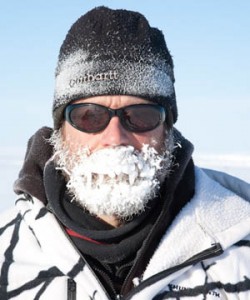 In Part 2 of our interview with Henderson we speak about is recent book, Malamute Man and his upcoming book, The Malamute Chronicles. In his new book he plans to talk about some of the training of these magnificent animals as well as some of his adventures in the most remote areas on earth.

We also talk about the logistics of planning and completing a trip of this magnitude including transporting 3500 pounds of gear up and down mountain passes, run ins with polar bears, wolves and caribou but the total absence of seeing another human being for months on end.

This is a different type of mushing. Old school mushing.

Listen to Part 1 of Joe Henderson’s interview that originally aired on August 15, 2012