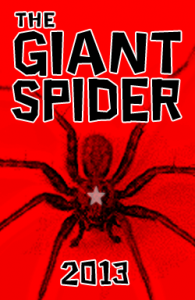 I know, I know, we are a dog training show but it is also Halloween! Being that we are huge horror and sic-fi fans and even host our own 31 Nights of Horror at our home in Alaska every October, how could we not snatch up the opportunity to talk to a couple of the coolest people on the planet, Chris and Sid?

The films of Christopher R. Mihm are like no other independent movies being made today. They are a tribute to the old 1950s style drive in movies that you saw as a kid, complete with great acting, phenomenal story telling and they are even filmed in black and white!

Mihm releases a film every year. Last year’s House of Ghosts was a huge hit and was even filmed in Korpi’s Victorian-era home. This year it is The Giant Spider! I can not wait to see it.